For over a year now Sandy and I have been fortunate enough to be running our own Dog Daycare in Hyannis, Ma. on several occasions we have tried to explain just why we opened, but the true message can be hard to convey. I wanted to take a minute and put into my words why we opened Kota’s Place Dog Daycare and Boarding. You can read Sandy’s story here

Sandy and I met in Arizona in the fall of 2015. She was there helping out her mom and working as a nurse at Chandler Regional Medical Center, and I was there with my son (he was helping me out but he doesn’t know it). We met by chance at a small gathering at the House of Brews; both there to watch a football game. (One of us thought the team was the South Dakota Charges – I set her straight).

As we continued to date, we used dog daycare in Arizona for Dakota aka; Kota. In the year that followed, we traveled the country and used more daycare facilities. Some were great! Some were sketchy at best. We knew that behind the entrance door, we never really knew what was going on with Dakota. We had experiences that were expensive but we realized that our experiences were actually teaching us an invaluable lesson.

As time passed and our relationship matured, we settled on the Cape to be closer to my family. I worked at a local car dealership and Sandy at Cape Cod Hospital. We had overlapping shifts which made daycare for Dakota a necessity once again.

It was early on that we encountered issues with the daycare; Drop off by this time, pick up by that time or Dakota will be locked over night in a crate. It was constant pressure to be there within their little window. At times I questioned if there was anyone there at other times during the day. It was effecting my work, as there were times I left work in the middle of a customer to “get the dog.” Fail, and it was expensive. A daycare charge for the first day, boarding charge for the unwanted overnight and a daycare charge the next day – even if I picked him up by 8:00 am.

I recall after a few months of this, wanting a tour of the facility. I had been rebuffed on several occasions. I finally demanded and was permitted beyond the front entry. Once behind the entry door, the stench of urine hit me so hard, I choked. We left the dog home after that and I would run home to let him out when time permitted. We were all miserable.

About a month before we were married I was able to secure our building. It was not easy – huge time constraints and a lot had to be done and I was still working at the dealership 50-60 hours a week. I was blessed to have a very good friend help me with the internal construction for Kota’s Place and 2 weeks after our wedding we had it ready to open. 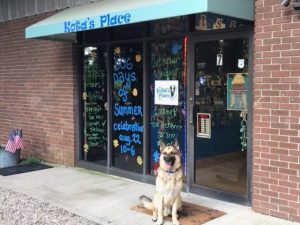 A few things that you may not know about Kota’s Place Dog Daycare and Boarding;

We opened Kota’s Place for a few different reasons; Our love for Dakota is as unconditional as the love he gives us every day. At Kota’s Place we want to convey that love to every pet and owner that may have had to endure the unknown. We are honest about what we do and how we do it. It is the only way you can rest assured that your dog, is actually our dog too.

We are proud of what we have accomplished in our first year. We hope that you are as well.

There are no upcoming events at this time.